General Atomics MQ-1 Predator is an unmanned aerial vehicle (UAV) which the United States Air Force (USAF) describes as a MALE (medium-altitude, long-endurance) UAV system. It can serve in a reconnaissance and forward observation role, and can also fire two AGM-114 Hellfire missiles at identified targets. The aircraft, in use since 1995, has seen combat over Afghanistan, Pakistan, Bosnia, Serbia, Iraq, and Yemen. The MQ-1 Predator is a system, not just an aircraft. The fully operational system consists of four air vehicles (with sensors), a ground control station (GCS), and a Predator primary satellite link communication suite. The U.S. Air Force considers the Predator unmanned aircraft system (UAS) a "Tier II" vehicle. 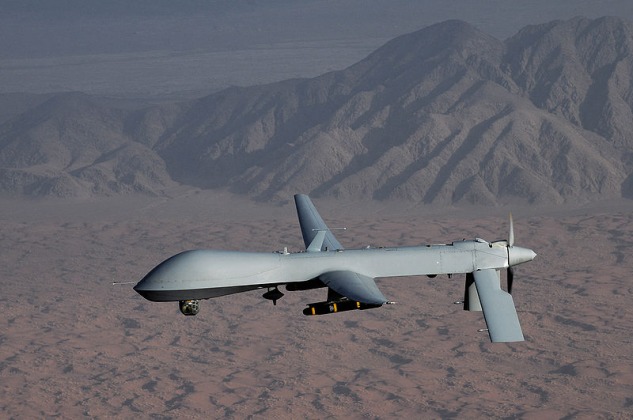 MQ-1 Predator
Command and sensor systems
During the campaign in the former Yugoslavia, a Predator's pilot would sit with several payload specialists in a van near the runway of the drone's operating base. (In its Balkan operation, the CIA secretly flew Predators out of Hungary and Albania.) Direct radio signals controlled the drone's takeoff and initial ascent. Then communications shifted to military satellite networks linked to the pilot's van. Pilots experienced a delay of several seconds between tugging their joysticks and the drone's response. But by 2000 improvements in communications systems (perhaps by use of the USAF's JSTARS system) made it possible, at least in theory, to fly the drone remotely from great distances. It was no longer necessary to use close-up radio signals during the Predator's takeoff and ascent. The entire flight could be controlled by satellite from any command center with the right equipment. The CIA proposed to attempt over Afghanistan the first fully remote Predator flight operations, piloted from the agency's headquarters at Langley.[12]

The Predator air vehicle and sensors are controlled from the ground station via a C-band line-of-sight data link or a Ku-band satellite data link for beyond-line-of-sight operations. During flight operations the crew in the ground control station is a pilot and two sensor operators. The aircraft is equipped with the AN/AAS-52 Multi-spectral Targeting System,[13] a color nose camera (generally used by the pilot for flight control), a variable aperture day-TV camera, and a variable aperture infrared camera (for low light/night). Previously, Predators were equipped with a synthetic aperture radar for looking through smoke, clouds or haze, but lack of use validated its removal to reduce weight. The cameras produce full motion video and the synthetic aperture radar produced still frame radar images. There is sufficient bandwidth on the datalink for two video sources to be used at one time, but only one video source from the sensor ball can be used at any time due to design limitations. Either the daylight variable aperture or the infrared electro-optical sensor may be operated simultaneously with the synthetic aperture radar, if equipped.

All Predators are equipped with a laser designator that allows the pilot to identify targets for other aircraft and even provide the laser-guidance for manned aircraft. This laser is also the designator for the AGM-114 Hellfire that are carried on the MQ-1.
Deployment methodology
Each Predator air vehicle can be disassembled into six main components and loaded into a container nicknamed "the coffin." This enables all system components and support equipment to be rapidly deployed worldwide. The largest component is the ground control station and it is designed to roll into a C-130 HerculesThe Predator primary satellite link consists of a 6.1 meter (20 ft) satellite dish and associated support equipment. The satellite link provides communications between the ground station and the aircraft when it is beyond line-of-sight and is a link to networks that disseminate secondary intelligence. The RQ-1A system needs 1,500 by 40 meters (5,000 by 125 ft) of hard surface runway with clear line-of-sight to each end from the ground control station to the air vehicles. Initially, all components needed to be located on the same airfield.

Currently, the US Air Force uses a concept called "Remote-Split Operations" where the satellite datalink is located in a different location and is connected to the GCS through fiber optic cabling. This allows Predators to be launched and recovered by a small "Launch and Recovery Element" and then handed off to a "Mission Control Element" for the rest of the flight. This allows a smaller number of troops to be deployed to a forward location, and consolidates control of the different flights in one location.

On May 18, 2006, the Federal Aviation Administration (FAA) issued a certificate of authorization, which will allow the M/RQ-1 and M/RQ-9 aircraft to be used within U.S. civilian airspace to search for survivors of disasters. Requests had been made in 2005 for the aircraft to be used in search and rescue operations following Hurricane Katrina, but because there was no FAA authorization in place at the time, the assets were not used. The Predator's infrared camera with digitally-enhanced zoom has the capability of identifying the heat signature of a human body from an altitude of 3 km (10,000 ft), making the aircraft an ideal search and rescue tool.[14] 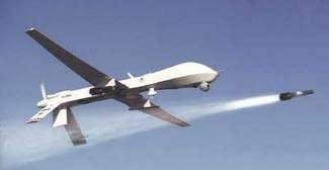