They still fly high! A New York city lawmaker has almost declared a war on pigeons but back in the Walled City of Old Delhi, the pigeons are safe and the tradition of rearing them is still alive.                Photo: SandeeP Saxena 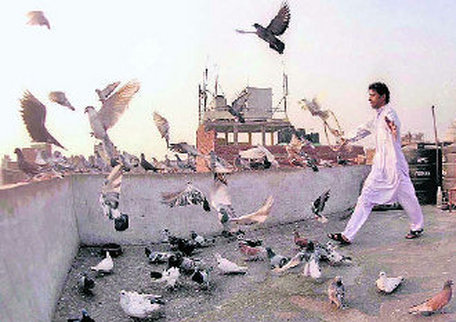 More than a game A kabootarbaaz in Old Delhi

“I keep them like my children,” says 40-year-old Mohammed Islam with a gleam in his eyes, fondly pointing towards a large cage (almost the size of a room) packed with a variety of pigeons. The tradition of keeping pigeons in Old Delhi is perhaps as old as the Moghul-era city itself, may be older. “This is Roshan Chirag, that white one is Basra, the blue in the corner is called Arsinger,” Islam enthusiastically names the variety of his collection of about 150 pigeons. “These are Kabli. They can fly for 12-13 hours at a stretch,” he adds as he takes out a beautiful white and brown bird from the cage. He has inherited the treasure from his father who was a medical practitioner in Chitli Qabar area of Jama Masjid. His father used to be a Khalifa and had more than a dozen disciples who learnt the nuances of pigeon-flying from him.

“It is important to know what to feed pigeons at a given time of the year,” says Farooq, a pigeon- keeper in Ballimaran area of the Walled City. Farooq is a qualified doctor but everyday he makes it a point to feed his 70-80 pigeons, literally from his hands. It means about two hours a day. “Special care has to be taken of these birds during the incubation period. And then the new-borns are nursed with utmost care,” says Farooq. These are the kind of things one has to learn from a Khalifa.

The hobby is not confined to an individual’s choice. Competitions of pigeon flying are held regularly in Old Delhi with hefty prize money and people (Kabootar baaz in common parlance) from neighbouring areas, especially western U.P., too participate in them. During the competition, people fly their pigeons and the one whose birds return first, wins the competition. “We have won several such competitions held at a national level,” says Islam with pride.

As for the money involved in this hobby, well, it’s not that inexpensive. The pigeons are available from Rs.200 to even one lakh, depending on their pedigree, looks and capability to fly for long hours. The pigeon called Homer, that can even fly thousands of miles and can return to their master, are prized at around Rs.80,000 to one lakh a pair. Among them, the Belgium Homer is the costliest.

Messenger birds The birds of this pedigree were used as messenger birds in olden days. “Roshan Chirag, Maxpie and Basra are priced between Rs.5000 and 25,000, while Gola, Kabli and Nisaware sell for Rs.250 to 1000,” reveals Ilyas, a bird seller at Jama Masjid. Do people cough up that kind of money for pigeons? “Of course, they do,” says Ilyas.

A market is held every Friday near Jama Masjid where people buy and sell pigeons with great fervour. They look at the birds right, left, up and down, and if a bird passes the test, they haggle over the price. Finally, the deal is struck. Some people visit this market just for fun. The market is considered an ideal place for novices to learn about pigeons.