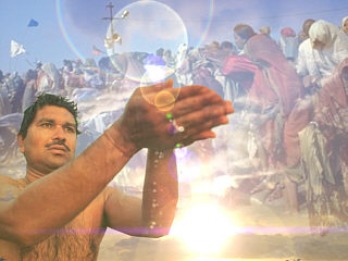 From the Vedic times, around 3000 B.C. to 1000 B.C., Indians (Indo-Aryans) had classified the material world into four elements viz. Earth (Prithvi), fire (Agni), air (Maya) and water (Apa). To these four elements was added a fifth one viz. ether or Akasha. Ac cording to some scholars these five elements or Pancha Mahabhootas were identified with the various human senses of perception; earth with smell, air with feeling, fire with vision, water with taste and ether with sound.

Whatever the validity behind this interpretation, it is true that since very ancient times Indians had perceived the material world as comprising these 5 elements. The Buddhist philosophers who came later, rejected ether as an element and replaced it with life, joy and sorrow.


Since ancient times Indian philosophers believed that except Akash (ether), all other elements were physically palpable and hence comprised miniscule particles of matter. The last miniscule particle of matter which could not be subdivided further was termed Parmanu. The word Parmanu is a combination of Param, meaning beyond, and any meaning atom. Thus the term Parmanu is suggestive of the possibility that, at least at an abstract level Indian philosophers in ancient times had conceived the possibility of splitting an atom which, as we know today, is the source of atomic energy. This Indian concept of the atom was developed independently and prior to the development of the idea in the Greco-Roman world. The first Indian philosopher who formulated ideas about the atom in a systematic manner was Kanada who lived in the 6th century B.C. Another Indian philosopher, Pakudha Katyayana who also lived in the 6th century B.C. and was a contemporary of Gautama Buddha, had also propounded ideas about the atomic constitution of the material world.

These philosophers considered the Atom to be indestructible and hence eternal. The Buddhists believed atoms to be minute objects invisible to the naked eye and which come into being and vanish in an instant. The Vaisheshika school of philosophers believed that an atom was a mere point in space. Indian theories about the atom are greatly abstract and enmeshed in philosophy as they were based on logic and not on personal experience or experimentation. Thus the Indian theories lacked an empirical base, but in the words of A.L. Basham, the veteran Australian Indologist “they were brilliant imaginative explanations of the physical structure of the world, and in a large measure, agreed with the discoveries of modern physics.”

The Story of Kanada

The school of philosophy which contributed to the development of ideas about the atom was the Vaisheshika school. A brilliant philosopher by the name Kashyapa (later called Kanada) is credited with having propounded the concept of atom for the first time. According to legend, Kashyapa lived in the 6th century B.C. He was the son of a phi losopher named Ulka. From his child days Kashyapa displayed a keen sense c servation. Minute things attracted his attention. The story goes that once when young boy he had accompanied his fath a pilgrimage to Prayaga, he noticed that thousands of pilgrims who were flocking the town littered its roads with flowers grains of rice which they offered at the tmples by the river Ganges. While everybody else was busy offering prayers, or bathing the Ganges, the young Kashyapa started collecting the grains (Kana) of rice that littered the streets.

Looking at this strange behaviour coming from a boy who seemingly belonged to do family, many of the passers-by curious and started wondering who he could be and why was he acting in strange manner. Soon a crowd collected around the young Kashyapa who continued collecting the grains, oblivious of the attention he was attracting. Passing by that was Muni Somasharma a learned Sage, wondered why the crowd had gathered time when everybody should have been the bathing ghats for the morning’s ritual bath. On going near he saw for himself reason and heard the derogatory remarks being made about the young Kashyapa. Muni Somasharma knew who Kashyapa was, he silenced the crowd and said that, knew who the boy was.

Being himself curious to know the reason for Kashyapa’s strange behaviour, Somasharma asked him why he was counting discarded grains which even a beggar would not care to collect. Somewhat hurt at question, Kashyapa replied that howsoever miniscule an object might be, it nevertheless was a part of the universe. Individual grains in themselves may seem worthless, but a collection of some hundred grains make up a person’s meal, the collection many meals would feed an entire family and ultimately the entire mankind was made of many families, thus even a single grain of rice was as important as all the valuable riches in this world.

This reply of the young Kashyapa deeply impressed Muni Somasharma who said that one day Kashyapa would grow into a celebrated philosopher and said that in recognition of Kayshapa’s unusual sense of perceiving miniscule objects he would henceforth be Kanada, from Kana which means a grain.

This was how Kashyapa came to acquire the Kanada, which was made immortal in history of Indian science due to the path-breaking conception of atom and relativity which Kanada was to put forth. He propounded the Vaisheshika-Sutra (Peculiarity Aphorisms). These Sutras were a of science and philosophy. Their subject was the atomic theory of matter. On reading these Sutras we find that Kanada’s atomic theory was far more advanced than formulated later by the Greek philosophers, Democritus and Leucippus.

It was Kanada who first propounded the that the Parmanu (atom) was an indestrutible particle of matter. According to the material universe is made up of Kana. When matter is divided and sudivided, we reach a stage beyond which no division is possible, the undivisible element of matter is Parmanu. Kanada explained that this indivisible, indestructible y cannot be sensed through any human organ.

In saying that there are different types of Parmanu for the five Pancha Mahabhootas, Earth, water, fire, air and ether. Each Parmanu has a peculiar property which depends, on the substance to which it belongs . It was because of this conception of peculiarity of Parmanu (atoms) that this theory unded by Kanada came to be known Vaisheshika-Sutra (Peculiarity Aphorisms). In this context Kanada seems to arrived at conclusions which were surpassed only many centuries after him.

According to Kanada, an object appears to be heavy under water than it does in air because the density of atoms in water is more than in air. The additional density of , in water, Kanada said, takes on part of the weight of an object, hence we feel only a part of its total weight, while in air, the lesser density of atoms results in a lesser part of an object’s weight being picked by air, hence we feel the object to be heavier in air than what is was when under the water. In saying this, in a very elementary but important way, Kanada foreshadowed Archimedes’ theory that a body immersed in a fluid is subject to an upward force equal in magnitude to the weight of the fluid it displaces. Kanada’s idea also had shades of relativity in it which was propounded by Einstien in our times.

About his ideas on atom, Kanada observed that an inherent urge made one Parmanu combine with another. When two Parmanu belonging to one class of substance combined, a dwinuka (binary molecule) was the result. This dwinuka had properties similar to the two parent Parmanu. In the material universe, according to him, Parmanu be longing to different classes of substances combine in different combinations giving us a variety of dwinuka, which in other words means different types of substances. Apart from such combination of different Parmanu, Kanada also put forth the idea of chemical changes occuring because of various factors. He claimed that variation in temperature could bring about such changes.

He cited the examples of blackening of a new earthen pot and the ripening of fruit to illustrate the chemical change in substances brought about by the heat. Thus according to Kanada all substances, all matter that existed in the universe was formed of Parmanu (atoms). The variations in the matter reflected the peculiarity of the Parmanu which constituted that particular matter, the variety of combinations between different types of Parmanu and the effect on them of variation in temperature.

These Indian ideas about atom and atomic physics could have been transmitted to the west during the contacts created between India and the west by the invasion of Alexander. The Greeks invaded north-western India in around 330 B C. Alongwith Alexander, came Greek philosophers like Aristotle who is reported to have been Alexander’s mentor. Scholars like Aristotle would surely have keenly studied the sciences of the lands which the Greek armies overran. Even after Alexander’s departure, massive trade and diplomatic relations existed between Indians and Greeks (who had settled in Asia) This way perhaps, Indian ideas could have travelled westwards where they were developed further.